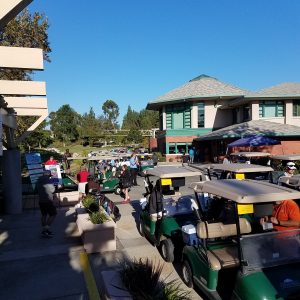 “For it is in giving that we receive.”
― Francis of Assisi

On one of the first crisp mornings of Fall, Bank of America held their 19th annual United Way Golf Tournament. It was held at the beautiful Coyote Hills Golf Course in Fullerton.

The organization goes beyond temporary fixes to create lasting change in communities around the world, they impact millions of lives every year. As of October 9, the United Way Network has raised more than $59.44 million for mid- and long-term recovery efforts related to Hurricane Harvey, Hurricanes Irma/Maria and the earthquake in Mexico.

The morning started off with a Helicopter Ball Drop.  Participants played “Ready Golf” to keep things moving and there was also a shotgun start.

The afternoon concluded with a BBQ Luncheon which included both silent and live auctions.  Participants placed bids on donated items to raise money for the United Way—the largest donation item was a 70” flat screen television with a retail value of $5,400! Dave Jordaan, Director of Construction, arrived for the luncheon and auction.  Kecia Ellsworth, Senior Account Manager, served as a volunteer.

Excel Construction was able to participate by being a Platinum Sponsor of the event.